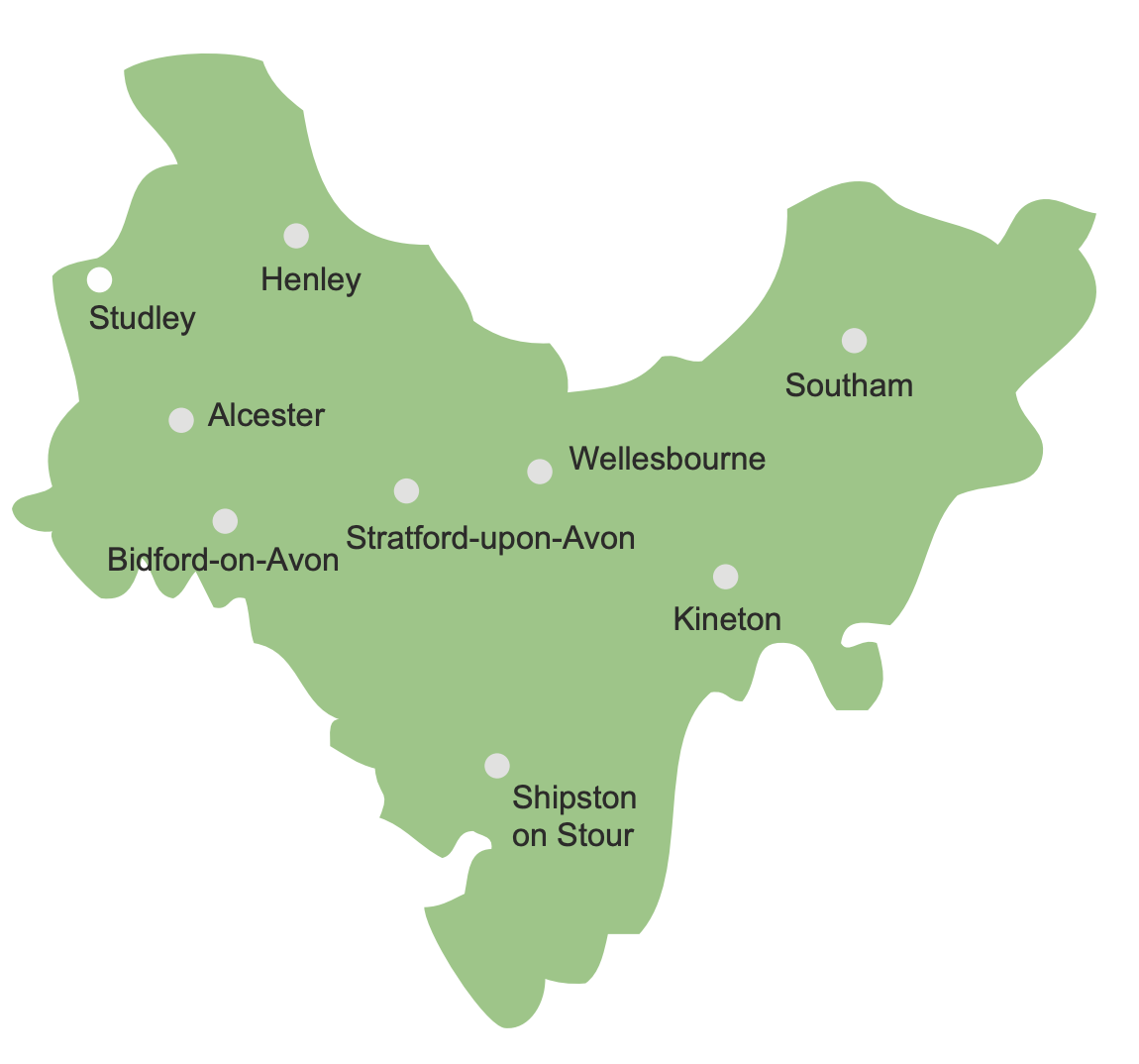 With a population of 120,485 at the 2011 Census, and lying at the south of the county, Stratford District forms one of five District and Borough councils in Warwickshire. Stratford upon Avon is the largest settlement, with approaching a quarter of the total population, and there are a number of important rural centres. The district has a rural character and there are some 250 communities spread across 979 square kilometres.

The council’s planning Core Strategy envisages a minimum of 14,600 new houses being built in the period 2011 to 2031. Property prices are high compared with much of the West Midlands and the average age of residents is higher than the national average. Tourism, based mainly upon the Shakespeare connection, agriculture and the automotive industry are three areas of major importance to the local economy.

The Liberal Democrats believe that we are privileged to live in such a desirable area and that therefore we have a duty to both current and future generations to preserve what is best about the Stratford district, whilst recognising that action is needed by the council to help those who, through housing or other problems, are not able to fully share in these benefits.

Our policies in this Manifesto are based on the following principles:

The Liberal Democrats exist to build and safeguard a fair, free and open society, in which we seek to balance the fundamental values of liberty, equality and community, and in which no one shall be enslaved by poverty, ignorance or conformity.

It is a core Liberal Democrat belief that decision making should be as close to local communities as possible.

We would encourage the development of Neighbourhood Development Plans and Parish Plans so that residents have a major influence in the way that their communities develop.

Area Planning Committees are important, so that residents can see decisions about the development of their communities are made by local councillors from the area concerned.

We believe the council should give support and assistance to individuals and groups who contribute to social inclusion and who work towards maintaining the sustainability of their community.

We would promote partnership working between the Police, Traffic Attendants, Dog Wardens and other services that work in the community, with each assisting the others with information and support, to cut crime and anti-social behaviour.

We will provide stronger enforcement for lawbreaking such as litter and dog fouling offences and take action against graffiti, vandalism and fly-tipping, to encourage pride in our communities.

We would work harder to ensure that crime opportunities are designed out at development stage on all new developments.

We support the renewal and enhancement of the council’s CCTV systems. Maintaining local health services, including care services, is important - to rural communities in particular. The district council must work in partnership with the health service and county council on transport systems to ensure access is available to all.

Major changes are being planned for the NHS and care services. It is essential that the organisations introducing changes are kept aware of the special needs of our rural area and that local people have a voice in deciding the future of their services.

We believe that there are many and various threats to our environment, particularly from climate change. We believe the impact on climate change should always be considered when the council introduces planning and other policies.

We will inform residents about where and how recycled waste is used with a view to helping them maximise recycling and avoid undesirable practices such as long distance “export” of waste.

We will continually review energy consumption across the District, particularly at the Council’s own sites, to minimise the use of carbon-based fuels.

We will invest in energy improvements to provide a financial and carbon Payback.

We will work with partners, suppliers and contractors to improve both their and our environmental performance.

We will encourage the use of electric vehicles through council installed charging points across the district.

In many parts of the district traffic flows and volumes are a major concern. The district council has to rely on partner councils and organisations in many cases, but we will encourage the council, through the planning process, to pay greater attention to existing problems and to the impact of future housing and commercial development.

A number of the council-owned parks and open spaces have been neglected. We believe there are significant opportunities for improvement through working with partner organisations, with scope for help from voluntary organisations.

The council owns four major leisure centres in the district. Health problems arising from poor diet and obesity are much in the news and we would work with health organisations to make the council’s leisure resources more easily accessible for those with medical needs.

We believe that council tax should be kept at the lowest possible level, commensurate with providing the quality services that residents deserve.

We believe that there is strong evidence from other areas that one of the best ways for councils to save money is through sharing services with other councils and public bodies and we would strongly encourage this.

We would support prudent measures to increase the income of the council but are wary of the commercial ventures that some other councils have undertaken.

The district’s planning Core Strategy is due for review and we recognise the need to make provision for commercial developments, in order to provide the jobs that will keep our area prosperous.

The provision of affordable housing and local jobs should be aimed at reducing the current high level of in and out of district commuting.

Three of the district’s major industries are forecast to be significantly impacted by Brexit: agriculture, automotive and tourism.

Tourism may well flourish in the coming years if weaker sterling makes this an attractive destination for foreign tourists and if foreign holidays become more expensive for UK residents.

However, many farmers and those involved in the car industry are concerned over the possible impact of Brexit. We believe the council has a responsibility to take all action possible to support these vital industries.

We will work with partners in the education field, to help ensure that local residents have the training opportunities to access skilled jobs and that staff shortages do not become a major issue.

Support, mainly through ‘signposting’ to other agencies, should be provided both to any EU residents encountering residence issues and to UK citizens deciding to return from overseas.

This district is one of the most expensive for housing in the West Midlands, whether renting or buying. Many young people cannot afford to live in the communities in which they were brought up.

Increasing numbers of people are presenting themselves to the council as homeless and the numbers of households registered on the council’s HomeChoicePlus system for social housing is increasing rapidly. We will actively seek to enhance the council’s leadership role in housing, enabling more affordable homes to be built and to keep them affordable.

We believe that the council should develop its own affordable housing schemes, wherever possible using the financial contributions provided by developers when they are granted permission to build without on-site affordable housing. Using this money, together with public land when available, will ensure that affordable housing is developed at low cost, thus providing a future revenue stream for the council for re-investment.

Where developers are allowed the concession of providing less affordable housing on a site than is laid down in the council’s planning Core Strategy (usually 35% of any development) on the grounds of non viability, then it should be automatic that the planning permission should contain a ‘clawback’ clause.

This would provide for a post audit of the development, with compensation to the council should the estate have proved to be more profitable for the developer than outlined in the viability study.

A number of housing developments have come forward in recent years where the mix of house types does not reflect the needs of the district as reflected in the planning Core Strategy.

Strong action is needed to ensure that the sorts of houses being built are those required by those who live or work in the district and not those designed to maximise the profits of the developers.

There is widespread agreement that our high streets face major problems. Footfall and sales are dropping because of increased shopping on the internet and rents and business rates do not properly reflect this drop in sales and profitability.

The district council has a leading role to play in rejuvenating our high streets. It must encourage the conversion of shops to housing in less popular shopping areas. It must promote the alternative use of shops in towns as entertainment and leisure destinations. The infrastructure of our high streets - pavements, seated areas, planting - must be made more inviting.

In our rural areas and villages, we will support the retention of local shops, which provide a lifeline to communities with limited public transport. We will support initiatives to open and sustain community shops.